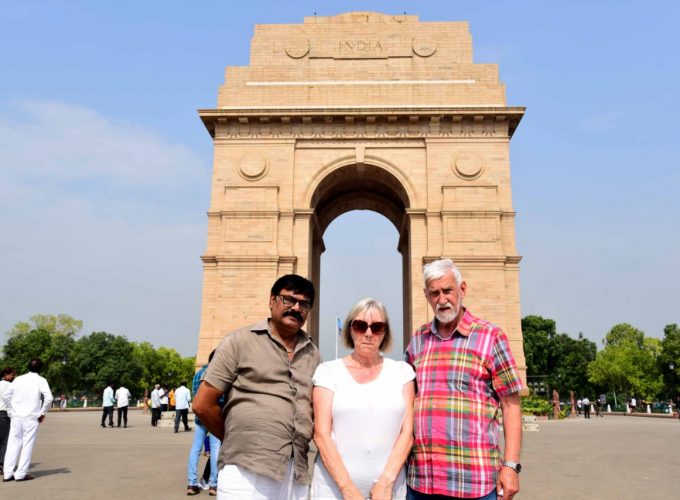 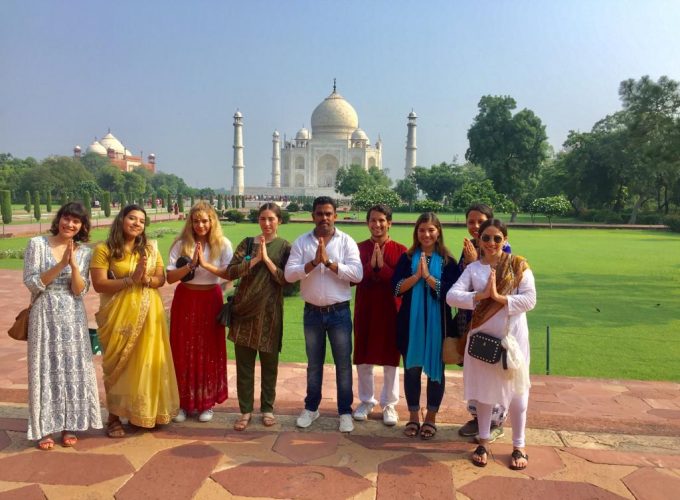 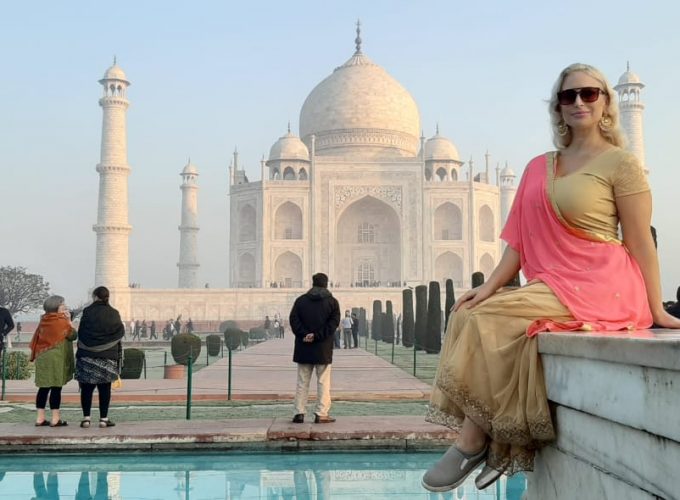 From Delhi: Day Trip to Taj Mahal and Agra Fort – By Car
155 reviews 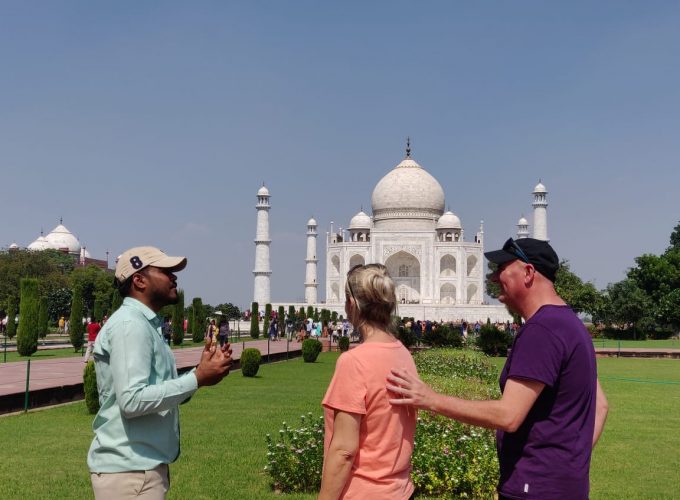 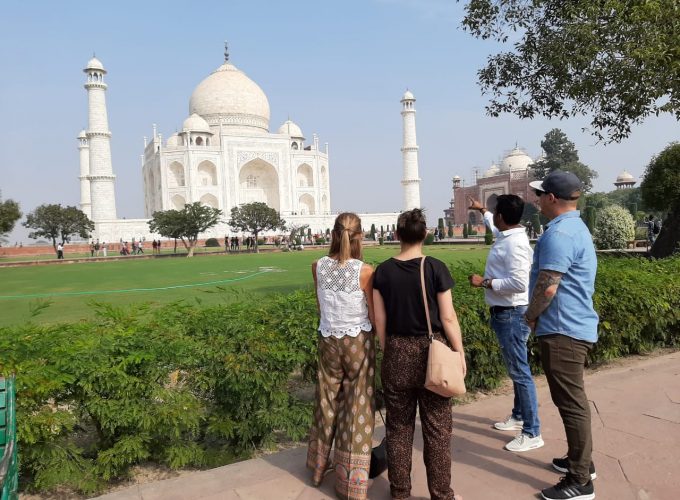 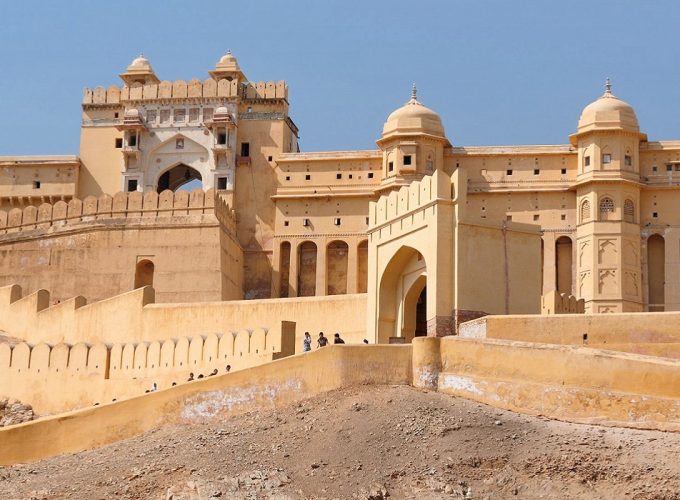 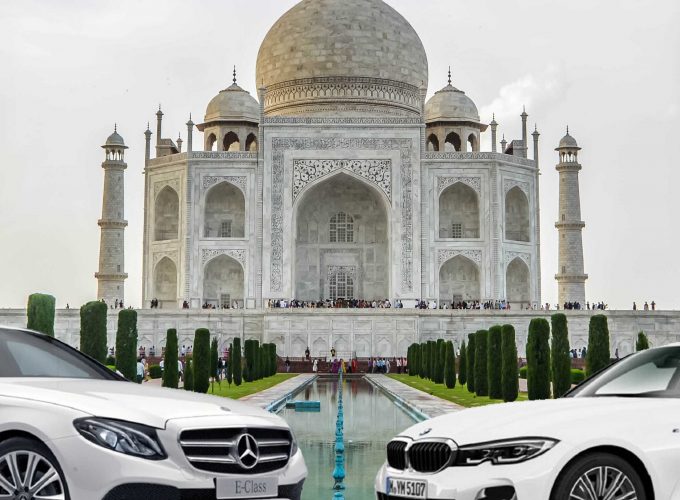 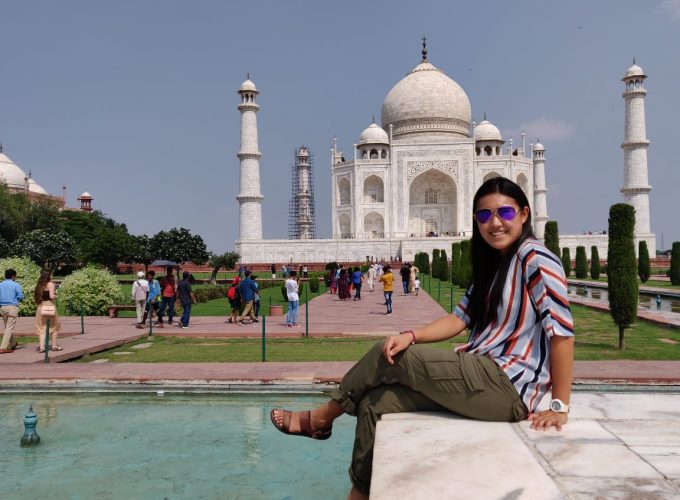 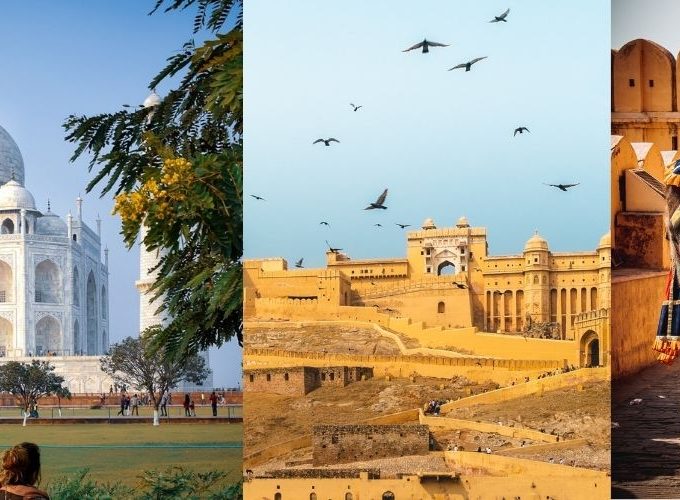 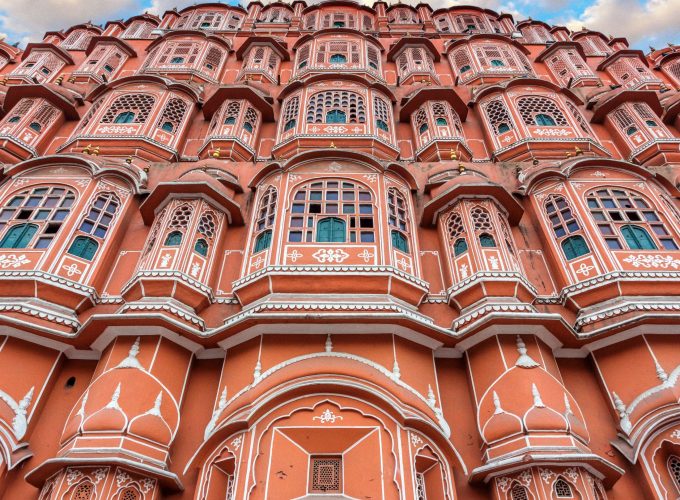 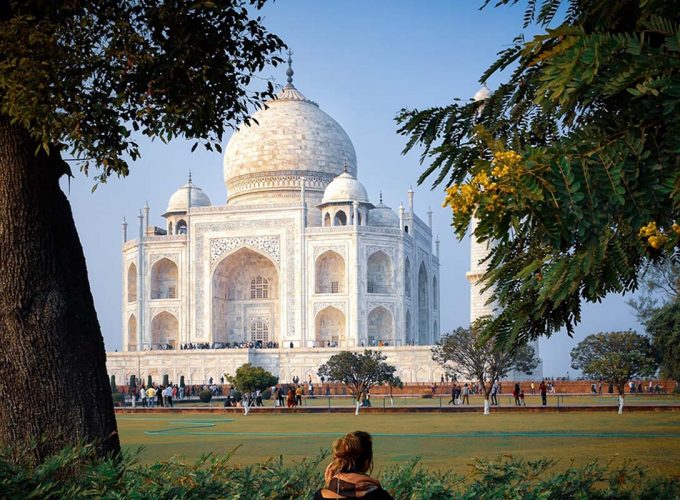 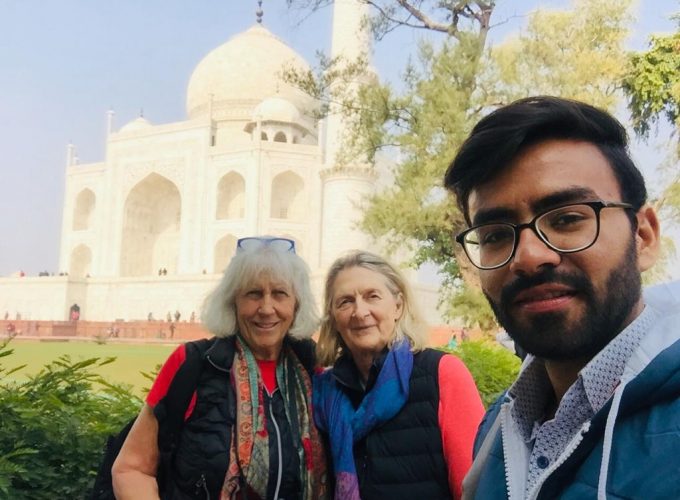 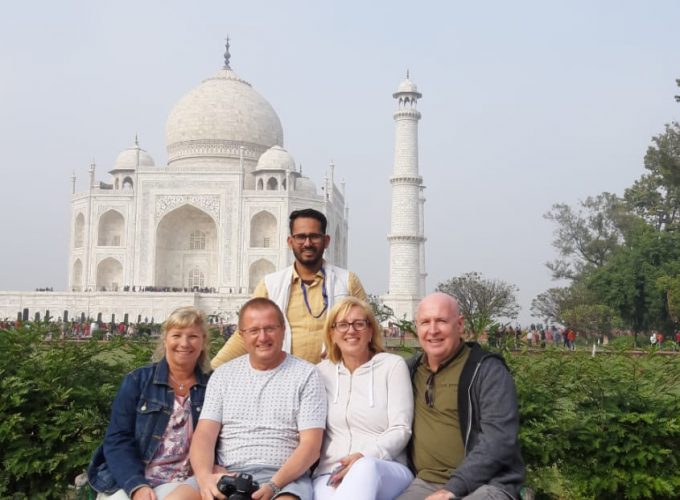 Tatyana Dobryak
Verified
Excellent Going to Agra from Delhi by fast train 01st class was a very relaxed 90 minutes of travel. We were collected from the hotel at 06:00 and wisked through rain to the train, our driver took us to our seats and photographed us for the next guide. Our Russian & English fluent guide Sadiq Hussain with driver Jeetu met us in the train, and off we went to the Taj, Red Fort & the Babi Taj, (babi Taj is a must see) Sadiq was an excellent guide, we were the only 2 foreigner at any of the locations, and the Indian people could not have been more accommodating in allowing us to visit in VIP mode (worth the small cost to go VIP). PIONEER took care of every detail, lunch was very nice, and we were deposited back to the train for a relaxed return journey to Delhi, no cars, no cows, no horns, no risk. Recomended Tatyana Dobryak Far East Russia

ARIVARASAN A
Verified
Tourist Mr.sameer Khan bring us two times to visit Taj mahal and visit Agra fort so superb guide and well explained lot of things.. and take lot of photos and make us so happy .. thank u

Denny F
Verified
Great start in India! Old Delhi is a wonderful place (: . I was lucky enough to have found this tour because due to corona restriction a lot of places were closed, and many activities were not happening. The tour service sent me a car to pick me up from my hotel out of Delhi ( so not very close) and this is already a big added point. We explored the old city, with a lot focus on local streets, shops and food. The tour guide knows a lot about the old city, and he showed me an amazing spot where to eat great local food! He made me feel at my ease with also that crowd and confusion around and additionally he was a great photographer so I started this trip in India with already an amazing set of fresh pics to remember this amazing trip! We also had a ride on the tuk tuk bike in the center. And if it was not corona time, two more stops and some temple visits were going to happen. I very recommend this tour to start having a bite of Delhi and as a first step into the Indian history and culture (:

AK
Verified
One day TajMahal trip I took a day trip on train and it was fantabulous trip where it is a flawless plan from Pioneer Holiday. The guide(Tahir Khan) picked us from the pick up point and was throughout the trip helping us out from elaborating the history and background, taking us to every monument and guiding us through out. Also, Tahir took my family to a great restaurant and I will recommend Tahir always and refer pioneer holidays to everyone who is doing a trip with them.

Denny F
Verified
A must do experience! The tour was very complete, Our tour guide Ali was amazing! Super friendly and explained everything about the site and the Taj Mahal. He also knew a lot of tricks for special pics, so now I have a lot of special and cool pics to show to friends and family! He showed us also a couple of local shops in Agra and we stopped for dinner together. Really highly recommended!

John Hackenberg
Verified
Amazing Experience! We booked a 1-day tour from Delhi to Agra by car online through Pioneer Holidays. We were very impressed with the quality of car and driver that we received. The driver, Ali, is a gem. He was on time, very accommodating, and even managed to put all our suitcases on the carrier for the long drive from Delhi to Agra. The tour guide, Nabeel, was great too. We were looking for an English-speaking tour guide for our visit to Taj Mahal and Agra Fort, and Nabeel fit the bill. He was also very knowledgeable and made the tour very memorable with interesting details such as the unique connection to the number 22 in the building of the Taj Mahal. A picture perfect tour of the Taj Mahal and Agra Fort!

Karthik
Verified
Great Tour Great experience..Vicky guide explained every part of the monuments . . Really loved it...We enjoyed Taj Mahal and Agra fort. Every thing was smooth and comfortable for my family. Lunch was perfect. We highly recommend this tour company. Thanks pioneer holiday for wonderful Tour..

Ranjith E
Verified
Excellent experience The trip was excellent. I highly recommend this company for agra trips. We had a wonderful time. Our guide Vicky Was very helpful throughout the journey. Our driver Irfan was an excellent driver and the car was very clean.

Mahesh B
Verified
Perfect Taj Mahal Trip Our Taj Mahal tour with local guide VICKY was fantastic. He met us at Agra and we took a local auto to see Taj Mahal. Since autos wouldn't allow us near Taj, we had to walk about 500 meters to reach the area near Taj. Visiting Taj Mahal with VICKY is a wonderful experience. He is very knowledgeable and explains the history of Taj well, and he takes good photographs of us, too. We also visited a marble craving manufacturing plant, where we purchased a fine craving of the Taj Mahal.
Tripadvisor rating score: 5.0 of 5, based on 1953 reviews.

TOUR PACKAGES FROM DELHI – THE CAPITAL OF INDIA

Being India’s Capital City, Delhi is a union region that is the heart or center of the nation. It unites every place being at the core and is also an appealing destination to be explored by travelers! If you want to get insights into all the pilgrimage spots, monuments, and metro rides of Delhi, choose the most fitting Delhi Tour Packages available below.

Places to Visit in Delhi

The Red Fort built using the red was identified as the official place of Mughal reign, after which in the 5 th ruler of the Mughals, Shah Jahan, transferred the capital domain from Agra to Delhi.

Humayun’s Tomb has been declared among the UNESCO Heritage Sites, the primary garden-tomb on the Indian Subcontinent.

India Gate is famously known as the All India War Memorial, devoted to the 82,000 fighters who had lost their lives during World War I and the Third Anglo-Afghan War.

Also recognized as the Baha’i Houses of Worship, where crowds of tourists pay a visit, regardless of their belief or religion.

The Rashtrapati Bhavan is a remarkable building with enormous political influence over the country since British rule. It becomes worthy in the evening for the beauty of the lights and is believed to be a very beautiful and tranquil destination after the Taj Mahal and Qutub Minar.

Tours packages from Delhi are your opportunity to avail of astounding deals and go on a holiday that you have been thinking about for a long time. Choose out any of these unique destinations for remarkable tours from Delhi.

Known for its stunning palaces and lakes, Udaipur is among India’s favorite places to visit. On your trip from Delhi to Udaipur, you can attend Taj Lake Palace, Lake Pichola, explore the City Palace, heritage walk, Udaipur food tour, and so on. You can also participate in adventure activities in Udaipur like nature trail hiking, horse riding at Aravali ranges, driving the ropeway ride.

The World’s oldest living city, Varanasi, is the holy capital of India. It is among Hinduism’s seven sacred towns. Temples engulf Varanasi at nearly every turn, but the Kashi Vishwanath Temple is the most visited of all. This divine town is also an outstanding place for Buddhists. Gautam Buddha taught his primary sermon in Banaras, a part which is presently in Sarnath.

Located on the banks of River Yamuna, Agra is a famous visitor place as it houses one of the seven wonders of the earth, the Taj Mahal. It is a sneak glimpse into the structural past and legacy of the Mughal reign with two other UNESCO World Heritage attractions Fatehpur Sikri and Agra Fort. Architecture, history, and romance create the charm of Agra, making for a must-tour for anyone residing in or visiting India.

The home of the famous Golden Temple, the classical city of Amritsar, depicts the brave character of Punjab. A day in this tranquil town begins with the holy devotions from Gurudwaras. This city is also renowned for its Jallianwala Bagh massacre and its closeness to Wagah Border.

Places to tour from Delhi within 100 km

Places to tour from Delhi within 100 km

The weather conditions at Delhi are severe, which means that the winters are too cold, and summers are extremely hot with monsoons that stay favorable. So the period of October to March remains the most suitable time for the visitors to tour Delhi. However, you must avoid the last weeks of November to January for the extreme smog getting control over the city.

How will you reach Delhi?

Arriving in the capital city is way more comfortable both via trains and flights! If you prefer to visit via air, you will be linked to almost every Indian major city and land at the Indira Gandhi International Airport from the area you visit. If you favor traveling to Delhi via trains, then the closest railway stations cover Anand Vihar railway station, New Delhi Railway Station, and the Hazrat Nizamuddin, from where you can travel to the site of accommodation.